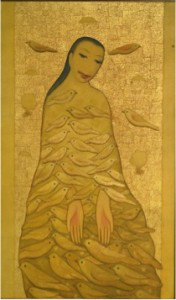 Nude art is a unique form of art that’s been practiced for hundreds of years. Not only is it incredibly bold and unique in nature, but it’s also used to decorate modern living spaces. Many contemporary artists today have sought inspiration from previous nude artists and incorporated their impressions into their work.

The history of nude art is as rich as the art form itself, and one needs to do thorough research to really find out how it became one of the most popular of art forms.

Below we will discuss the history of nude art:

The history of nude art can be traced back to the heroic male figure of Greek art that gained popularity between 25,000 to 30,000 BC. During this time period, Willendorf Venus also became increasingly popular. This was a small statuette of a corpulent female who signified fertility.

Moreover, Indian temple art during that time also started to depict voluptuous female nudes. These had religious connotations attached to them. Male nudes in Greek art, on the other hand, were seen to portray Greek gods and other godlike mythical heroes in legend.

It is important to understand that nude art is predominantly a form and extension of Western art. Male and female nude figures are perceived quite differently and tend to symbolize different things. It was found that during the 4th century BC, renowned sculptors like Praxiteles and others started to create female nudes in their work. The goddess of love, Aphrodite, is one of the most famous female nude sculptures. Some argued that double standards between the male and female nude existed, where many considered it indecorous for paintings to portray female nudes.

Nowadays, nude art is also associated with pornography. Many contemporary viewers get taken aback and overwhelmed with the outright nudity in front of their eyes, and associate modern societal mindsets of nudity to them.

The new-age feminist art blatantly portrays female genitals and even menstruation. Many nude paintings today are seen as graphic by many, and view the female body in sheer detail.

The Nude Maja was created by artist Francisco Goya between 1797 to 1800 and portrayed a confident nude woman unashamed by the gazes of men. The woman painted was the artist’s own mistress.

Another famous nude painting was created by Egon Schiele in the year 1917. The expressionist form of art showed the connection between sex and death and was greatly inspired by the words of Sigmund Freud. It depicts a woman lying nude on her stomach.

About the Author: Art d 4