Geometric art is similar to the abstract art form and is characterized by the use of geometric forms and shapes. With a long history behind it, geometric art styles have been widely incorporated into modern art.

Not only is geometric art used as stunning decorative motifs, it’s also considered to be an art form due to its interesting and intricate nature. Islamic art, for instance, predominantly uses geometric patterns and motifs. It is said to have existed hundreds of years before the art form span across Europe and began influencing Western art. It’s also believed to depict important aspects of spirituality and science.

Below we will list some leading geometric art movements in history:

Bauhaus was a prominent German school of art that initially sprang out of the arts and crafts movement. This movement was not just about precise lines and movements, but rather focused on flowing imperfect lines and soft brushstrokes.

Bauhaus, however, did not agree with these methods and solely focused on geometric shapes. Wassily Kandinsky is considered to be one of the leading figures and father of contemporary abstract art. He sought to paint various geometric shapes that symbolized spirituality and human emotions. The Bauhaus period greatly inspired his work, and he started to incorporate geometric shapes into his work.

Cubism lasted from the early 1900s all the way to the 1920s and originated from Paris, France. Renowned cubist painters include Pablo Picasso and Robert Delaney. Cubism argued against traditional forms of depicting nature and sought to portray it in its most authentic form.

They used geometric shapes like quadrilaterals, cones, cylinders, and spheres in their works. These were used in paintings, sculptures, or both. 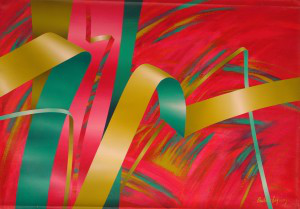 Futurism was a dominant geometric movement originated in 1911, and was greatly inspired by the theories and ideologies of cubism. It represented the notions of a futuristic society and incorporated these into its work.

Their geometric shapes were considered to be of a more complex form than those of cubism, mainly because they represented modern societal elements like fast cars, advanced machinery, and energy explosions.

If you wish to buy original artwork online, head over to Artd4.We offer original art for sale suitable for all budgets, including geometric paintings. Our online art store also offers oil paintings and abstract paintings.

About the Author: Art d 4